Church Find welcomes Canberra Hare Krishna Temple in Ainslie, who are engaged in a revitalisation journey enriching the community, for all their latest times and information including times.

The International Society for Krishna consciousness is a denomination of the Gaudiya Vaishnava faith, a devotional tradition based on the teachings of Bhagavad-gita and the Bhagavat Purana (Srimad Bhagavatam). The precepts and practices of the members of the present day ISKCON were taught by the 15th century saint and religious reformer Sri Chaitanya Mahaprabhu and His principle associates, the six Goswamis of Vrindavana.

Sri Chaitanya, whom devotees revere as a direct incarnation of Lord Krishna, gave a powerful impetus for a bhakti (devotional) movement of Krishna followers throughout India. It was under His direction that hundreds of volumes on the philosophy of Krishna consciousness were compiled. The movement diminished somewhat until the 19th century, when an outstanding Vaishnava theologian, Bhaktivinoda Thakura, again revived Krishna consciousness. His son, Bhaktisiddhanta Sarasvati Goswami, became the guru of Srila Prabhupada and instructed him to make the spreading of Krishna consciousness all around the world the mission of his life.

After arriving at New York City in September 1965, Srila Prabhupada struggled alone for the first year to establish his God conscious movement. He lived simply, lectured whenever and wherever he got opportunity, and gradually began to attract some small interest in his teachings. In July of 1966, while still working alone from an obscure storefront in New York City’s Lower East Side, Srila Prabhupada nonetheless founded a spiritual society intended for worldwide participation. He called it the International Society for Krishna Consciousness or ISKCONfor short. 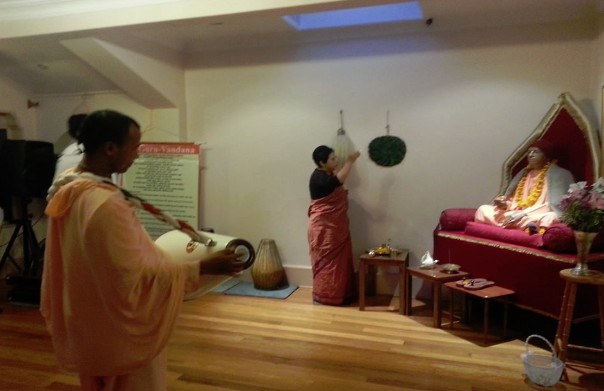 Canberra Hare Krishna Temple is a Christian church situated in Ainslie. Churches believe the entirety of the Word of God and worship the Living God, Jesus Christ, in Spirit and truth.  Church Services are noted for their anointed preaching and teaching and the signs and wonders that accompany them.