Church Find welcomes Shri Shiva Vishnu Temple Melbourne in Carrum Downs, who engaged in a revitalisation journey enriching the community, for all their latest times and information including times.

The Shri Shiva Vishnu Temple has its place among the Hindu temples now all over the world. The vision, dedication, courage and indomitable spirit of Hindu Society of Victoria gave the Hindu community of Victoria a priceless and everlasting legacy in the form of a truly magnificent temple. This unique temple will transcend time barriers to remain as an icon symbolizing the contribution of the Hindu community to a multicultural society.

The Carrum Downs Shri Shiva Vishnu Temple was conceived and built as a traditional Hindu temple in which Sri Shiva and Sri Vishnu poojas and other rituals are performed in a way similar to any temple in South India and Sri Lanka. The first festival was Holi in 1994 followed by celebration of the other festivals such as Deepawali, Ram Navmi, Ganesh Chaturthi and Krishna Janmastmi. Since 1998, a monthly Havan pooja is held on the last Sunday of the month, which has proved to be very popular with the devotees. Bhajans are sung every Friday evening in which many devotees participate.

The management committee is constantly improving the facilities at the temple for its devotees. Celebration of marriages at the temple has become a common feature among the community. Canteen facilities (Cafe Annapoorani) are available between Thursday to Monday with external and internal catering facilities to functions. 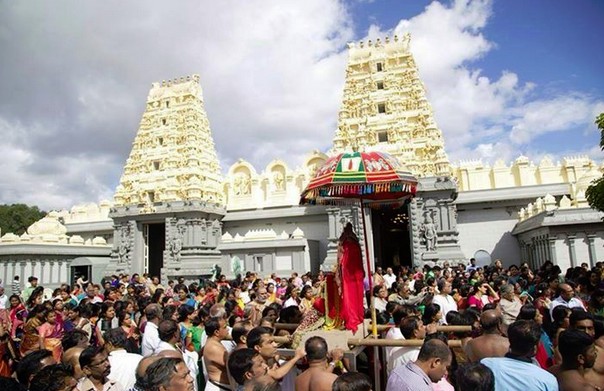 Shri Shiva Vishnu Temple Melbourne is a Christian church situated in Carrum Downs. Churches believe the entirety of the Word of God and worship the Living God, Jesus Christ, in Spirit and truth.  Church Services are noted for their anointed preaching and teaching and the signs and wonders that accompany them.